When searching for love on the Internet, most people end up connecting with the girl [or boy] next door, according to an analysis of messaging patterns across a major online dating platform.

Published this week in Sociological Science, the “big dating” study reveals geographic distance within the U.S. as the strongest driver of reciprocal interactions, which are instances when two users message each other.

“A crucial aspect of the analysis is that we were looking not just at who sent messages to whom, but who sent messages and got a reply,” says coauthor Mark Newman. Newman and lead author Elizabeth Bruch both study complex systems at the University of Michigan and at the Santa Fe Institute. “In other words, at least one message went in both directions between two people. We did this because we felt that that was a more reliable indicator of mutual [romantic] interest.”

When the researchers used a state-of-the-art algorithm to analyze 15 million of these two-way interactions among heterosexual users of a major online dating site, it revealed 19 distinct communities that closely mirrored geographic regions in the landscape of the lower 48 states.

“Even though everyone’s on the same dating site, there’s a distinct clustering to who interacts with whom,” says Bruch. She notes that the geographic clustering is consistent with a recent study of Facebook data, which found the incidence of online friendships decreases with geographic distance. “It’s not surprising that the dating markets were geographically clustered. But the precise boundaries of those markets were a little surprising to us.”

When the researchers mapped clusters of reciprocal messages to the three-digit zip codes of the senders, they found that some communities fell neatly within state boundaries, while others spilled over into nearby states. Texans, for example, tended to message strictly with other Texans, even though users in the northern part of the state live nearer to prospective matches in the Oklahoma panhandle than to those in Central or South Texas. Californians divided themselves into distinct messaging communities in the north and south of the state, while Kansas, Nebraska, Missouri, and Arkansas displayed a more open interstate relationship.

“It’s possible there’s a psychological barrier, where you feel like dating someone in another state is going too far,” says Newman.

Zooming from the national level to the metropolitan, Bruch and Newman applied a more complex community detection algorithm to the structure of submarkets — distinct clusters of people who tend to interact primarily with one another — in four major cities: New York, Boston, Chicago, and Seattle.

The researchers found that age is a key factor that defines men and women’s submarkets. Across all four cities, 75% of reciprocal messages were exchanged between people in the same age group. A 45-year-old man, for example, would be more likely to receive a reply from a woman over 40 than from a woman in her 30s (though he might well message both, aspirationally). On the whole, women were slightly younger than the men they connected with, and the ratio of women to men varied based on age group and metropolitan area.

“In Seattle, women in their 40s experience just a slight asymmetry in the number of single men and women, but in New York, the numbers are far more skewed,” says Bruch. “Based purely on sex ratios within submarkets: if I was a single guy in my 20s, I’d want to date in New York. But if I was a single woman in her 40s, I’d head straight to Seattle.”

One of the most surprising findings in the analysis was the extent to which race affected interactions within sub-markets. In Chicago, for example, men in the oldest age group messaged and received replies from substantially younger black women than white women in the same sub-market. A black woman would need to be, on average, eight years younger than the average white woman in order to compete in the same market. Though less pronounced than in Chicago, sub-markets in New York, Boston, and Seattle showed similar patterns for minority women, which varied based on the minority and the age group. 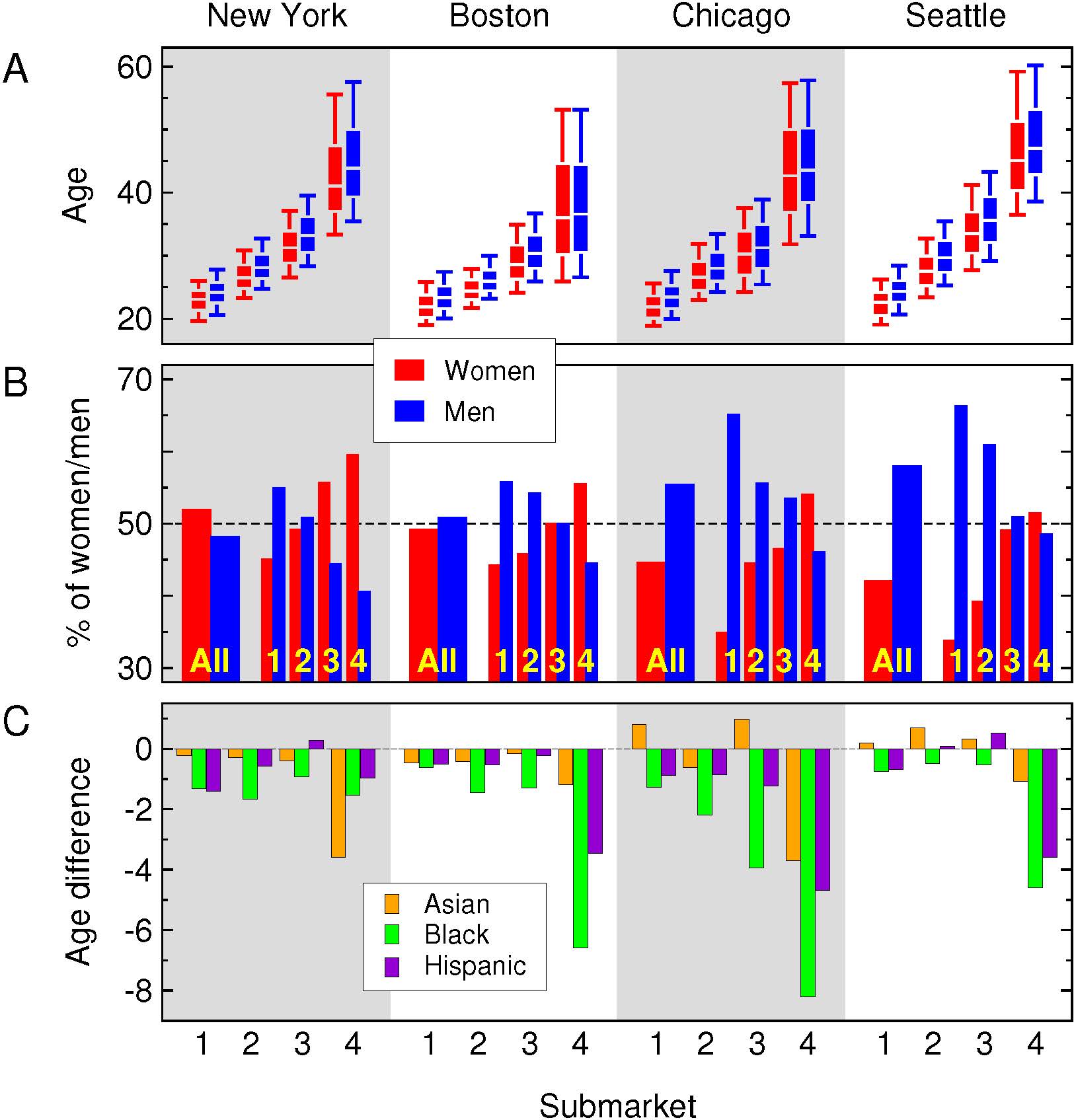 “The patterns suggest that men and women in different American cities are strategizing about who they message based on both race and age very differently,” says Bruch. “Dating markets are something we talk about all the time, but the way that we talk about them makes them out to be sort of an undifferentiated city-level phenomenon. What we’ve shown, in this analysis, is that that's just not true.”