He was a beloved member of the SFI community known especially for his electrifying demonstrations of touchstone concepts in complexity science. For more than 20 years as a summer mentor to REU students and teacher at SFI’s Complex Systems Summer School (CSSS), he introduced hundreds of students to nonlinear dynamics, self-organization, and to his unique and memorable definition of a complex system. “A complex system,” he said, “is a system with a laaarge throughput.” This definition was frequently followed by a demonstration of what happens when you pass 20,000 volts of electricity through metal ball bearings in a petri dish. They self-organize into tree-like structures with some fascinating and reliable mathematical properties.

“Alfred was one of the truly singular personalities at SFI,” says SFI President David Krakauer. “And moreover an experimental physicist with a special knack for learning through play. He was the only one in our community I can think of with this talent. We will miss him and his laugh!”

Paul Hooper, SFI’s Director of Education and an alum of the 2007 CSSS, says “Alfred was a titanic presence to SFI's Complex Systems Summer School. For hundreds of us who came through the school, Alfred's high-voltage physics demonstrations seared the intuition of fractal particle agglomeration into our brains. His generosity to the summer school students he taught, the undergraduate researchers he mentored, and to the Santa Fe Institute cannot be exaggerated. We will deeply miss him.”

Students adored Hübler and often requested that t-shirts be printed with his photo and his quotes. According to John Paul Gonzales, SFI’s summer school coordinator and Hübler’s lab assistant in Santa Fe, Hübler enjoyed a hyperbolic reputation at the summer school. “I think he taught his Arbitrons [tiny ball bearings] to play Tetris,” Gonzales jokes. “He was also rumored to be able to solve NP-hard problems.”

In addition to being a legendary teacher, Hübler contributed significantly to the field of complexity science. In his physics lab at the University of Illinois at Urbana-Champaign, he carried out some of the first experiments in the growth and dynamics of self-assembling electrical connections in metallic particles. He was also one of the first scientists to recognize that "chaotic" systems could be steered with less effort than systems undergoing more regular motion. At the time of his death, he was exploring ways to use microwaves to transmit electric power that may well eliminate the need for wires.

Hübler is survived by his wife, Marietta (Deutscher) Hübler and six daughters: Ines (Hubler) Mitra, Mija Hübler, Merla Hübler, Thera Hübler, Zita Hübler and Amrei Hübler; his sons-in-law, Sumit Mitra, Keven Wyld and Anthony Messina; his two grandchildren, Clara Wyld and Leo Mitra; and his brother and sister-in-law, Walter and Gabi Hübler, and their children, Florian Hübler, Jakob Hübler and Caroline Hübler. They were known to take adventures — canoeing, climbing mountains, and even wrestling alligators. Every summer, the family would drive from Illinois to New Mexico and camp out on their property south of Santa Fe, where they were building an adobe house.

"SFI was a very important part of my father’s life," Merla Hübler shared in an email. "The institute was a place where he could meet people from many backgrounds, all with a level of thinking that matched his own intellect. He often came home for dinner and told us about the many interesting people that he interacted with and unique and creative research he learned about. Aside from that, he enjoyed the welcoming culture of all the people at the institute. As children, we remember coming to pick him up from work and being greeted warmly by the staff and members of the institute. Lastly, the institute gave us the opportunity to live in Santa Fe, which we consider to be our second home."

SFI co-founder David Pines says "Alfred was a very special person, a scientist of great originality, a wonderfully effective and dedicated teacher and mentor, who was a great husband and father, and possessed enormous personal integrity."

“We have, I think, lost a towering figure. And a towering laughing Buddha of a figure, too,” says Laurence Gonzales, an SFI Miller Scholar and friend of Hübler’s. “He was a one-off.”

In life and in research, Hübler exemplified his own precept: “Ramp up the throughput until something spectacular happens.” 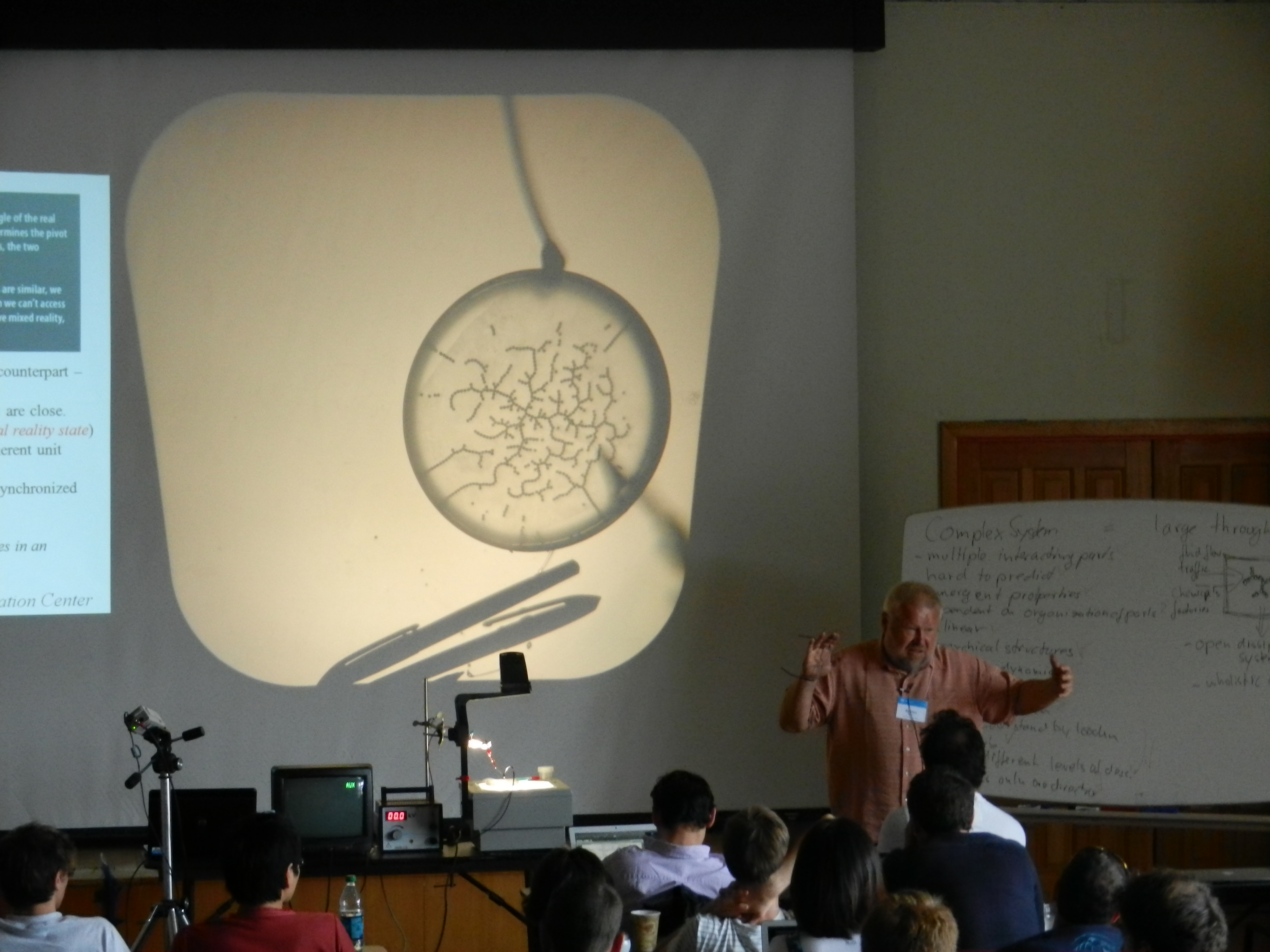 Watch Alfred Hübler’s Saturday Physics for Everyone lecture on YouTube