Inequality, climate change, sustainability, and poverty are among the topics of greatest concern for today’s students of economics.* Most economic textbooks, however, take up these topics only in their later chapters, if at all. How would economics look if climate change and economic injustice appeared at the start of textbooks rather than at the end?

One answer is provided by Microeconomics: Competition, Conflict, and Coordination, a new textbook by SFI Professor Samuel Bowles and Simon Halliday of the University of Bristol. The result, they say, is to upend the conventional content and allow a new more engaging way of teaching the subject.

Bowles explains, “The subtitle – Competition, Conflict, and Coordination – signals the main themes:  how both competing interests and cooperation play out when we interact with each other and with nature in acquiring our livelihoods.” The first chapter, for example, opens by asking why the residents of Palanpur, a village in India, fail to cooperate in ways that would overcome their poverty.

Students then learn the fundamental concepts of game theory, which provide a possible explanation of why Palanpur remains poor. These analytical tools are then used to explore conflicts of interest surrounding the overexploitation of an environmental resource. Key concepts of economic dynamics and the Nash equilibrium are taught using a model of tipping points and racial segregation in residential neighborhoods. Supply and demand — the staples of conventional microeconomics texts — make their first appearance in Chapter 8.

SFI Science Board Fellow Eric Maskin says of the book, “Normally students don’t see recent economic ideas until they reach the end of the book. Here such ideas are introduced starting in the first chapter.”  Halliday adds, “People call our text revolutionary, but we are just teaching an undergrad version of the economics that research economists now use in their daily work,  and we are applying it to real societal problems that people care about.” Bowles calls it “economics with a Santa Fe accent.”

The early introduction of game theory lays the foundation for an actor-centered version of economics. Economic and political institutions are modeled as the “rules of the game” in which firms, families, trade unions, and other actors are engaged. This provides the basis for understanding the exercise of power both in markets and in workplaces, and how this affects the distribution of wealth and income. 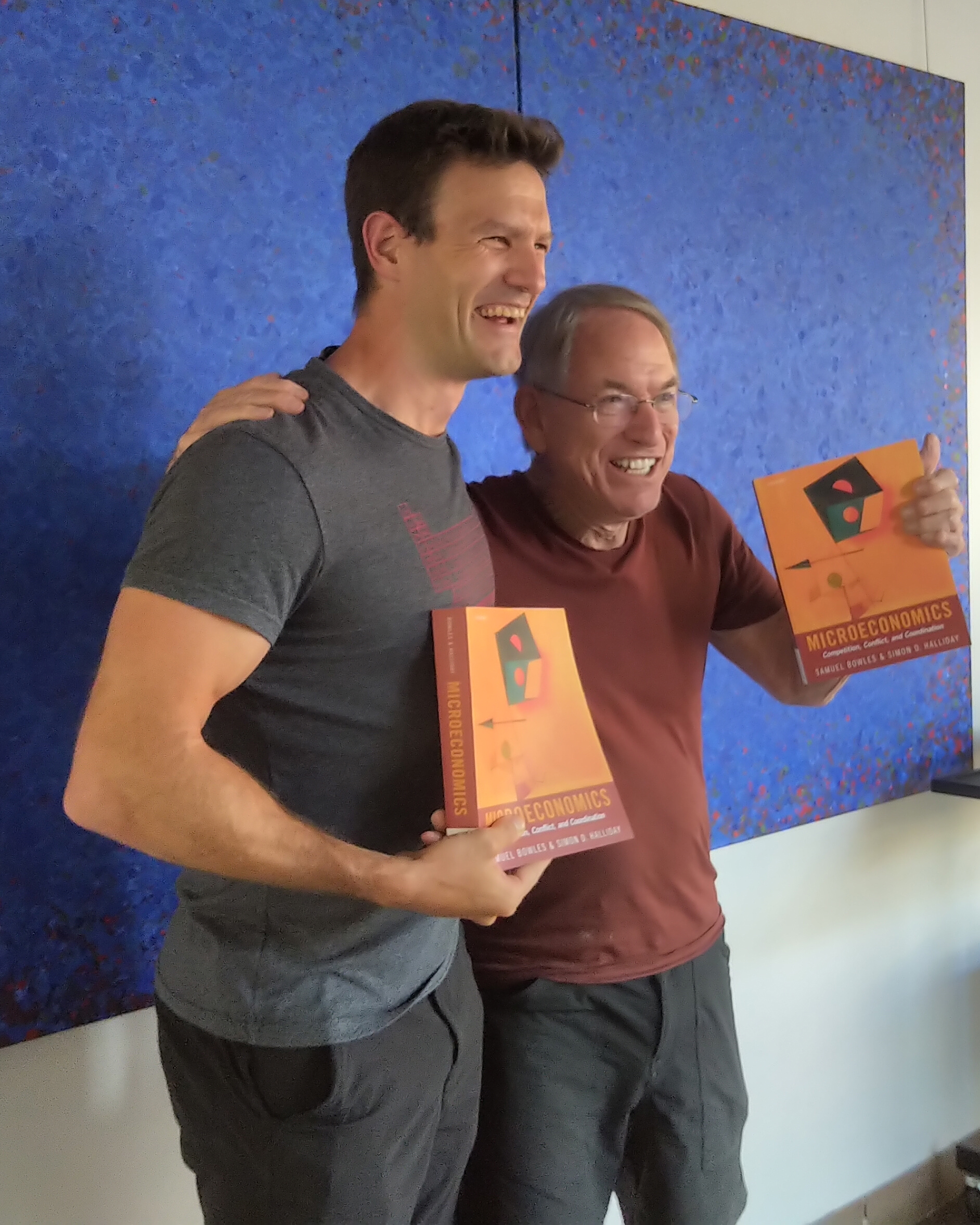 Both authors have performed controlled experiments about economic behavior, and not surprisingly, readers of their book are treated to a more empirically based and social-psychologically informed model of human motivation, replacing the conventional amoral and entirely self-interested “Economic Man.”

A key idea in the text — initially advocated by Friedrich Hayek — is that our institutions and how they work are shaped by the fact that information is scarce and local. Bowles and Halliday explain that this limits the effectiveness of both private contracts and governmental fiats as tools of governance.

The authors illustrate the consequences of limited information by critiquing the general equilibrium theory of perfect competition and illustrate an alternative model using an agent-based simulation. They go on to represent real-world capitalism as an extraordinary “innovation machine,” but one that sustains high levels of economic inequality. The book closes with a chapter on public policy and mechanism design, asking how the rules of the game could be altered to make the economy work better for all.

An online e-version of the text includes interactive figures that students can use to explore alternative assumptions and parameter values, short videos by Halliday on modeling, practice exam questions, and other learning resources. A free PDF version of the entire book is available on the authors’ web pages. A conventional print book is also available.

*Image 1: The CORE Project (www.core-econ.org) asked students around the world: “What is the most pressing problem economists should be addressing?” The size of the font in the word cloud above (from the Bowles Halliday text) indicates the frequency of their responses. Return to top

Image 2: Image 2: Simon Halliday and Samuel Bowles with copies of their new book the day it arrived at SFI. Photo by SFI External Professor Wendy Carlin