As part of the InterPlanetary Project's October series of events, the Santa Fe Institute is collaborating with Santa Fe’s world class, independent cinemas to showcase a series of InterPlanetary Films on Saturday, October 14th, 2017. 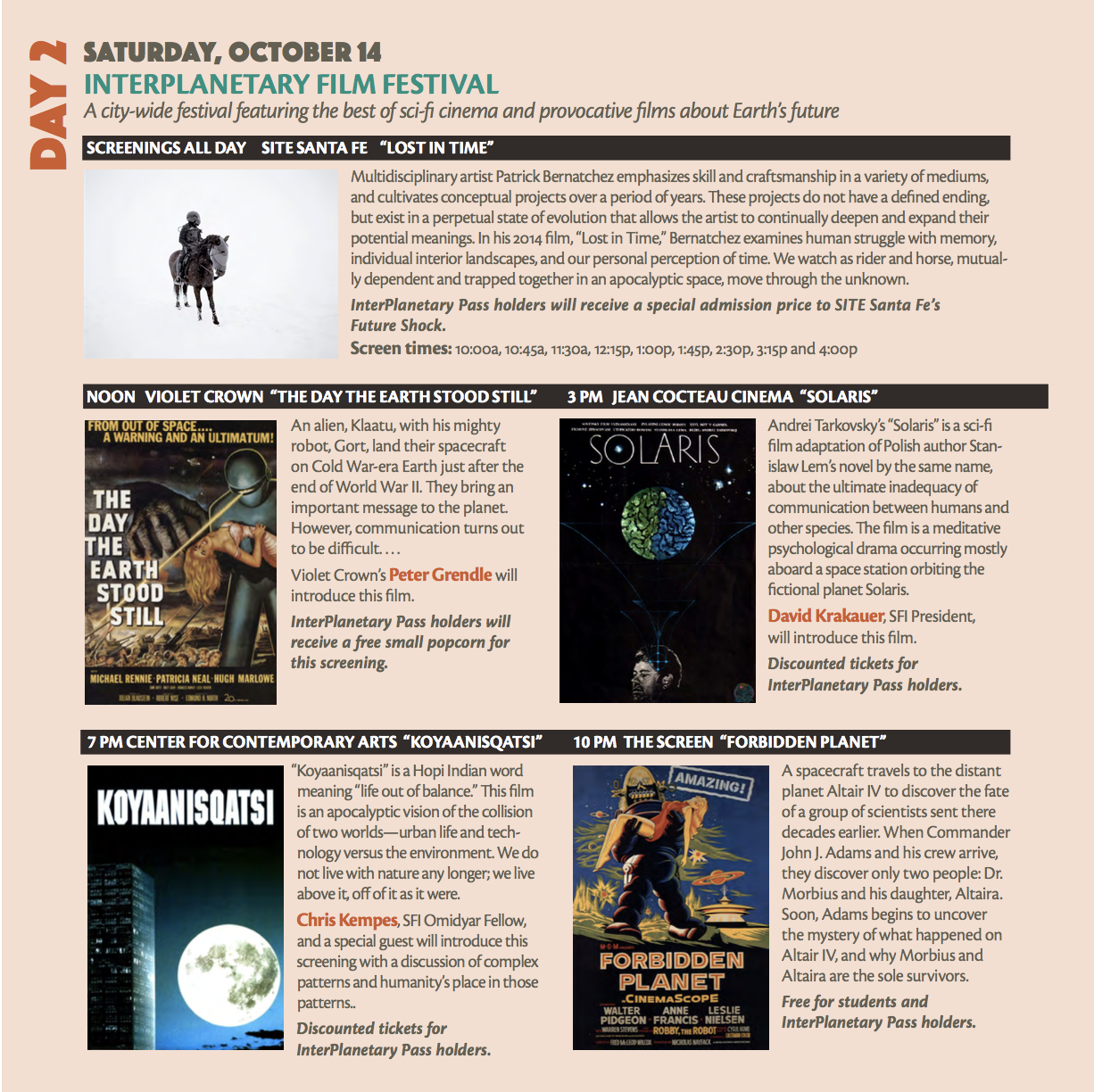 Multidisciplinary artist Patrick Bernatchez emphasizes skill and craftsmanship in a variety of mediums, and cultivates conceptual projects over a period of years. These projects do not have a defined ending, but exist in a perpetual state of evolution that allows the artist to continually deepen and expand their potential meanings. In his 2014 film, Lost in Time, Bernatchez examines human struggle with memory, individual interior landscapes, and our personal perception of time. We watch as rider and horse, mutually dependent and trapped together in an apocalyptic space, move through the unknown.

An alien, Klaatu, with his mighty robot, Gort, land their spacecraft on Cold War-era Earth just after the end of World War II. They bring an important message to the planet. However, communication turns out to be difficult, so, after learning something about the natives, Klaatu decides on an alternative approach.

InterPlanetary Pass Holders will receive a free small popcorn for this screening.

Andrei Tarkovsky’s Solaris is a 1972 Soviet sci-fi film adaptation of Polish author Stanislaw Lem’s novel y the same name. The novel is about the ultimate inadequacy of communication between humans and other species. The film is a meditative psychological drama occurring mostly aboard a space station orbiting the fictional planet Solaris. The scientific mission has stalled because the skeleton crew has fallen into separate emotional crises.  Psychologist Kris Kelvin travels to the Solaris space station to evaluate the situation only to encounter the same mysterious phenomena as the others.

David Krakauer, SFI President, will introduce this film at the Jean Cocteau Cinema.

InterPlanetary Pass Holders will receive discounted tickets to this screening.

KOYAANISQATSI is a Hopi Indian word meaning "life out of balance." This film, created between 1975 and 1982, is an apocalyptic vision of the collision of two different worlds -- urban life and technology versus the environment. The musical score was composed by Philip Glass. KOYAANISQATSI attempts to reveal the beauty of the beast! We usually perceive our world, our way of living, as beautiful because there is nothing else to perceive. There seems to be no ability to see beyond, to see that we have encased ourselves in an artificial environment that has remarkably replaced the original, nature itself. We do not live with nature any longer; we live above it, off of it as it were. Nature has become the resource to keep this artificial or new nature alive.

Chris Kempes, SFI Postdoctoral Resident Omidyar Fellow, and a special guest, will introduce this special 35mm screening at the CCA.

InterPlanetary Pass Holders will receive discounted tickets to this screening.

A spacecraft travels to the distant planet Altair IV to discover the fate of a group of scientists sent there decades earlier. When Commander John J. Adams and his crew arrive, they discover only two people: Dr. Morbius and his daughter, Altaira, who was born on the remote planet. Soon, Adams begins to uncover the mystery of what happened on Altair IV, and why Morbius and Altaira are the sole survivors.

Modeling the distributional epidemic-economic effects of the Covid-19 pandemic

How Can Complexity Economics Give More Insight Into Political Economy

Complexity economics models to estimate the economic impact of disasters: The Covid-19 pandemic and beyond

Consequences of heterogeneity in labor markets and firms outcomes

The emergence of government as organized violence-cum-robbery

The Thermodynamics of Natural and Artificial Distributed Computational Systems

The Costs and Benefits of Realism in Modeling: The Village ABM